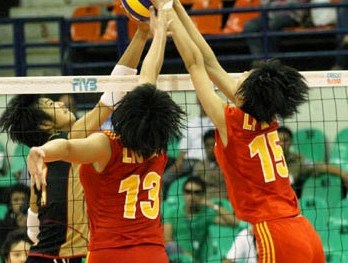 Beijing, China, March 31, 2010 – Thirteen teams will battle it out for a place in the Youth Olympic Games as well as the 2011 FIVB Girls’ Youth World Championship when the 8th Asian Girls’ Volleyball Championship gets under way in Kuala Lumpur, Malaysia from May 20 to 28.

The tournament will see just one team qualify for the first Youth Olympic Games, due to be held in Singapore from August 14 to 26, joining hosts Singapore as well as Egypt, Belgium, Peru and the NORCECA continental champions who is yet to be decided.
Additionally, ten Asian boys’ teams have registered to take part in the Asian Boys' Championship, also taking place in May in Iran.
The drawing of lots for the Asian Girls’ Volleyball Championship was conducted by Mr. Shanrit Wongprasert, chairman of the AVC Sports Events Council. The teams were divided into four pools for the preliminary round.
Pool A will see hosts Malaysia play Kazakhstan and Singapore whilst Pool B includes defending champions Japan, Australia and New Zealand. China, runners-up from 2008’s tournament, will take on Chinese Taipei and Iran in Pool C and Thailand face tough tests against Korea, Vietnam and India in Pool D.
Japan will be one of the favorites to clinch the Asian Youth Olympic Games ticket although arch rivals China will be desperate to dethrone the defending champions. In the past eight competitions, China claimed the gold medal five times whilst Japan picked up three. However Japan have beaten China in the last two finals, so will be high on confidence.
The results of the drawing of lots are as follows:

Pool match schedule is as follows:

May 20
Pool A: Malaysia vs. Singapore
Pool B: Australia vs. New Zealand
Pool C: Iran vs. China
Pool D: Vietnam vs. Thailand, India vs. Korea

May 21
Pool A: Kazakhstan vs. Malaysia
Pool B: Australia vs. Japan
Pool C: Iran vs. Chinese Taipei
Pool D: Vietnam vs. India Thailand vs. Korea

May 22
Pool A: Kazakhstan vs. Singapore
Pool B: Japan vs. New Zealand
Pool C: Chinese Taipei vs. China
Pool D: Vietnam vs. Korea India vs. Thailand